I was waiting in the car, stopped at the lights, today in Bridport, the nearest town to where I live and happened to glance in the window of Beach & Barnicott, a café/bar (which seems quite a relaxed and friendly place). There in the window was a poster about a gig featuring a band I hadn’t heard of. As I read-on I discovered it was me playing. Paul, who had asked me to play (and who is ill at the moment and won’t be playing alongside this Wednesday), had neglected to tell me the name we were playing under.

I think I’ll check them out.

Having just written the title to this post made me think of my late Dad. I’ll write more about him in the future.

This post however is about just how mean I’ve found myself capable of being. I’m constantly telling the whole family not to leave the fan-heater on in the bathroom. The other night however, I said not to worry and just to leave it on. They were surprised. What I didn’t tell them was that I’d just read in a houseplant book that the ‘Maidenhair Fern’ in the bathroom needs warmth.

We had a nice day today in West Bay:

I can’t pretend I’m not very pleased, not to mention excited, about an email I received a few days ago. The Curator of Photography at the National Portrait Gallery in London expressed his interest in acquiring six of my portraits. I’ll let you know who the portraits are of when I’ve signed, sealed and delivered the prints later on this month.

How jolly exciting. I just wonder what the 15 year old Pete Millson would have made of it.

I’ve just happened across my copy of Black & White photography magazine from 2002. The now editor, Elizabeth Roberts, interviewed me about my approach to portraits.

(An article by Elizabeth Roberts, which originally appeared in the August 2002 edition of ‘Black & White Photography’) 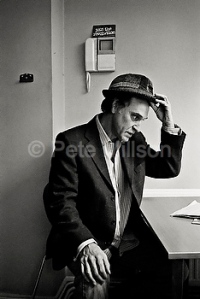 There are times when I think that being a journalist is a funny way of earning a living. There I am, standing outside a north London tube station waiting, once again, for a complete stranger to turn up. ‘I’m tall and wearing a T-shirt and glasses,’ he’d said over the phone. That description, it appears, covers roughly 50% of the male population walking past me. After 10 minutes or so, an old man with a craggy beard approaches. ‘Sorry I’m late darlin’, he yells, before doubling-up with laughter and heading off. Suddenly feeling rather conspicuous, I casually stroll up and down.

A couple of minutes later I hear my name being called and turning I see, bounding towards me, bespectacled and T-shirted, a tall young man, beaming. Phew. It’s Pete Millson. As we walk back to his house he strides beside me and we chat easily. By the time we get there he’s unwittingly answered my central question – what makes a good portrait photographer?

The answer is simple – he’s friendly, enthusiastic and at ease with himself – but there’s something else as well – he’s genuinely interested in other people.

But it’s time to get his side of the story. How did it all start? ‘ When I was young I played in bands and wanted to be in the music business,’ he says. ‘I was seeing a friend off at the airport on a long trip and he gave me a camera. I was thrilled with it. So amid all the emotional goodbyes I was asking him how to use it! I took a few rolls of film with it stuck on a middle setting – I’d no idea what I was doing,’ he says. ‘The results were terrible.’

He bought himself a teach-yourself-photography book and gradually began to learn. A friend showed him how to process film and he set up a basic darkroom at home. ‘I put together a portfolio of pictures of friends. I was still involved with bands so most of my pictures were musically orientated,’ he says.

He sent his portfolio to the New Musical Express and they invited him along to the office. ‘I must have caught them on a quiet day! I saw the art director and several other people and they seemed to like what I was doing,’ he says. ‘I was really bluffing at that stage – I still didn’t really know what was what – I was just really excited by taking pictures.’ Strongly influenced by Dutch photographer Anton Corbijn, Millson’s work was gritty and raw. ‘I was trying to teach myself just by copying him,’ he recalls. ‘I suppose that’s what appealed to NME.’

It was at this stage that he began to think about where his life was going. ‘I was in my early twenties and it began to dawn on me that if I didn’t get my act together I was going to have to do something really boring to earn a living,’ he explains. ‘But even so, I couldn’t really see where the photography was going.’

Nowadays, the work is regular, with a weekly interview column in the Guardian Friday Review called Home Entertainment. Pete works on this with journalist Will Hodgkinson who interviews while Pete photographs one famous person each week.

I was curious to know how an ‘ordinary guy’ like Pete felt about meeting the rich and famous and, more importantly, how he went about achieving an original and meaningful shot of someone who has been photographed ad infinitum. ‘It takes about half an hour for any awe to wear off – then you start to notice little things about the person – a shoelace undone or something – and you start to form an opinion of them.’ Few people, even the famous, he claims, like being photographed. ‘If I can make someone feel relaxed with me as a person, it’s a good start. So I just chat away.’ It isn’t difficult to imagine how Pete’s method would disarm even the most uptight.

To take a successful portrait, Pete believes, the subject must be almost unaware of the camera – as far as that is possible. ‘It took me a while to learn that,’ he says. ‘I didn’t understand at first what was going wrong – the pictures started to get worse. I knew all the technical stuff by then but what I didn’t realise was that the photographic skills, getting the right depth of field and exposure has to be learn so well it’s instinctive. Fiddling around with a camera or lighting while someone is just sitting there is disastrous. My job is to make the person feel relaxed. Once they are, then I jump in and get the picture – you have to wait until the real person emerges, and sometimes that’s only fleeting. It’s the hardest thing to do.’

Pete doesn’t pre-plan his sessions, preferring to take his chances with what comes up. He generally uses available light and works with handheld Nikon SLRs, occasionally using a Rolleiflex or Voigtlander rangefinder. What he ultimately aims for is capturing his subject in an unguarded moment when the tension and self-conciousness go out of the face. ‘I can’t really describe what happens,’ he says, ‘but you really know when it does. It’s nothing to do with what’s on the outside – it’s all to do with what’s going on within. The most important thing is to anticipate it because sometimes it only happens for an instant,’ he says. But, I wonder, how do you go about anticipating – what are the clues to be looked for? ‘Well, for instance, if you ask someone a question, momentarily they think about their answer – at that point they completely forget themselves and where they are. That’s the moment I dive in. You have to be observant.’

Pete admits that his method has taken some time to perfect. When he first started out he thought he ought to be doing the David Bailey approach – ‘That’s great darling, give me more’ – ‘Frankly, it scared me,’ he says, ‘I came to the conclusion I just couldn’t work like that. Now I’ve learnt there are all sorts of ways to be a photographer. I prefer to approach it quietly.’

Pete believes that good photography is largely down to editing. ‘You keep clicking away and you know you’re working towards something but you’re not quite there – and then you realise why, like maybe you’re standing in the wrong place, and it all begins to fit. Eventually you get one frame that does it – but that’s all you were after.’

You sense that, for him, his real passion is people. ‘I think we’re fascinating. Most people look great – they just don’t think they do. It all comes from inside. That’s exciting.’

Popped up this morning to the orchard up the road to let ‘George the Goose’ out of his shed and to put food out for him. Elliot and I went up. George was making a hell of a racket when we got there (par for the course I think). I looked at Elliot and Elliot looked at me. “You do it”, I said and so brave Elliot undid the latch. We’d already been told by our friends and neighbours, to whom George belongs, that he’s all mouth and no bite (or whatever the phrase is) but I was a little nervous that he might ‘go for us’.

Here’s a sequence of photographs of Elliot and George: